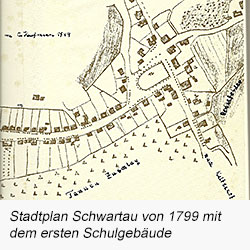 On May 3rd. 1787 the regional government in Eutin (at that time Schwartau belonged to the Grand Duchy of Oldenburg) approved the building plans for the first school in Schwartau. The building-site, “a young pine enclosure in the “Kaltenhöferstrasse”, today Geibelstrasse 10.

Owing to the ever increasing number of pupils, the school moved in 1819 to the Auguststrasse. The former schoolhousewas sold in the same year. It was demolished in 1899 and replaced around 1903 with the present day Art Nouveau villa. The original oak-beams of the old schoolhouse were used for the flooring.

The first ownersin 1904 were Marie Wolf and Wilhelmine Schröder. In 1950 Clara Seijer inherited the villa from her deceased husband, who had bought it in 1928. We bought the villa in 2003 subjecting it to a major overhaul making holiday apartments, while retaining the original charm of the building. 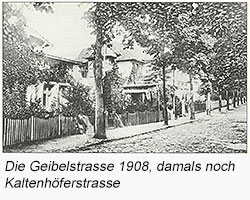 Many citizens in Schwartau were dissatisfied with the teaching in the original school and foundet a private School Associaton and were allotted the neighboring plot for the building of a new private school. Today, Geibelstrasse 14. The actual construction seems to have taken place between1834 and 1840. This building was sold to the seminarist Dillner in 1851 for 4500 Marks, who ensured the continuation of the school, on condition that the number of pupils did not exceed 50.

In 1862 it was bought by Dr. Heinrich Dammann, who had his surgery here. In 1959 the poperty was bought by my vather, the buiinessman Werner Kirsten, and was slowly transformed by us into holiday apartments. The last two were completed in 2014. 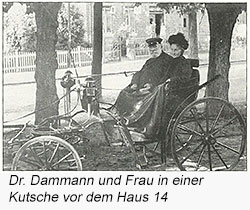 The play-grounds were divided up around 1900 and 1950 and allocated for house-building. Today, Geibelstrasse 12 and 16.